When Wilhelm Wundt distinguished the study of psychology from philosophy and biology in the late 19th century, he was filling a void: both philosophical and biological treatments had failed in their treatment of the human psyche and a new approach seemed not only warranted, but necessary.  Philosophy had, for the most part, remained in an idealist quagmire which admitted little room for experimental science, while biology’s limits make it particularly unsuited for addressing the distinctively non-biologically-reducible aspects of human thought and action—those aspects usually associated with the psyche: thinking, feeling, consciousness, the experience of subjective qualia, and so on.   The complexities of human behavior, it was rightly thought, deserve a study of their own, freed from both the uncertainties of philosophical speculation and the strictures of biological limits.

Despite striving for an independent psychological discipline, Wundt himself took principles directly from idealist philosophy: most notably, from Leibniz, whom Wundt quotes at the opening of his Beiträge zur Theorie der Sinneswahrnehmung (Contributions to the Theory of Sense Perception): “nihil est in intellectu quod non fuerit in sensu, nisi intellectu ipse” – “nothing is in the intellect which was not first in the senses, except the intellect itself.”  In other words, there are principles we recognize in our experience strictly on intellectual grounds, without deriving them from objects of sensation: logical rules of inference, principles of causality or teleology, and so on.  This Leibniz-derived implicit dualism shows its work ubiquitously in Wundt’s psychology (cf. his notion of “psychological parallelism”).

While later notable figures in the history of psychology would likewise derive some ideas and principles from philosophers, the separation between the two disciplines has continued to grow: in part because most of what today masquerades as “philosophy” is unprincipled sophistry that envies rather than guides the particular idioscopic sciences, but also because psychology has lost or displaced its roots.  In other words, there is today little understanding, let alone consensus, as to what the “psyche” itself actually is.  In consequence, the varieties of approach in psychology—especially in the therapeutic applications of psychiatry—have left us, our society, profoundly confused about what it means to be human.  Psychoanalyses of Freudian or Jungian or Lacanian derivation, existential therapies of Daseinsanalysis, logotherapy, humanism, and the opposed but often conflated schools of behaviorist and cognitive psychologies have, though perhaps searching for the truth, oftener muddied and muddled our sense of who we are by effacing any clarity about what we are.

To give a prime example of this confusion: consider the explanations psychologists have made in terms of “drives”.  A drive is described as an instinctually-based need that motivates our behavior.  Most famously, Freud popularized the idea of the “sex drive” or “libido”, as an unconscious energy which makes us seek out sexual release.  Does this actually explain our desire for sex—or only occlude its cause?  Believing our desires rooted in the energies of the unconscious makes them inaccessible except by abstruse methods of analysis—and maybe not even then, not really.  Rather, “drives” are sleights of hand of the kind Gregory Bateson softly ridiculed in a pretend dialogue with his daughter: what he called “explanatory principles”, which are really nothing other than terms on which scientists agree when they cannot explain what is actually happening—such as “gravity” or “instinct”.  In other words, these explanatory principles sound good, but tell us very little, if anything.

Read a contemporary paper in psychology and you’ll find them just as reliant upon such explanatory principles, the meaning of which are seldom if ever explored (Lawrence Barsalou—cognitive psychologist of some repute—for instance, demurs on the necessity of defining one of his most-used terms, “concept”; or consider the vagueness attendant upon terms such as “desire”, “motivation”, “will”, and so on).

Perhaps the most widespread but seldom-if-ever-addressed presumption of meaning in an explanatory principle is that of “mental health”; that is, we hear an awful lot about what constitutes mental illness with only vague overtures towards what constitutes a healthy mind—and very often, this “health” is given shape only as what accords with conventional societal norms and basic day-to-day presumed normal functioning.  Psychology and psychiatry, supposed to assist in the attainment and maintenance of mental health, have so thoroughly distanced themselves from philosophic wisdom that they have become groundless disciplines, unsure of what it is even they are studying.

What is sorely needed, therefore, for today’s psychological sciences (and especially cognitive psychology, the dominant paradigm of academic psychology) is a rediscovery of philosophical roots—not the aberrant moderns from whom Wundt, Freud, and others took their direction, but rather the original discoverers of the psyche: the ancient Greeks.

Plato divided the human psyche into three parts: the thinking, the spirited, and the desiring.  The first and last warred for direction of human behavior, aiming to sway the spirited to their respective sides.  As with most of Plato, there is a great truth in this division, but ever the asterisk; for Plato thought the body was incidental to our humanity.  His greatest student, Aristotle, contrariwise, discussed the capacities of the human psyche as integral with the body.  Crucially, he considered this integration not simply to involve desire—our concupiscible appetites being manifestly bodily, and hard to deny even for a spiritualist like Plato—but also cognition.

In his Περὶ Ψυχῆς (Peri Psyches—“On the Soul”), Aristotle employs a taxonomic principle of discerning human faculties: namely, that we distinguish kinds of objects, and from those distinguished objects we can discern distinct acts, and by those distinct acts we may identify distinct faculties.  This principle was subsequently employed by the Scholastics of the 13th and following centuries, whose distinctions remain relevant today.  Like Aristotle, they distinguished five exterior senses (while noting that touch is a “genus” of senses—as sensitivities to equilibrium, texture, temperature, etc.) as well as an integrating sense[1] and interior sense powers.  Where Aristotle treated the interior senses with minimal distinction, the Scholastics separated these out into faculties of simple retention, recollective retention, and the cogitative: the foremost being the retaining of simple objects of sensation without context (as colors, sounds, pains, etc.), the recollective retention being the relational pattern whereby an experience is structured (as the past occurrence of being pained at the blue flame of the stove burning one’s hand), and the cogitative being that which—together with the intellect—evaluates (i.e., judges beneficial, harmful, or neutral) and executes practical operations; comparable to what psychology today calls “executive functioning”.[2] 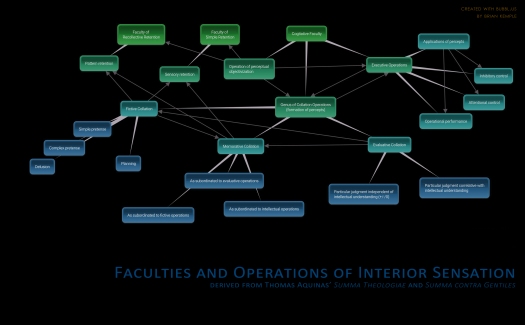 All this is a rather crude picture of the human perceptual faculties—and does not yet touch upon the manifold complexity introduced by the correlation of these faculties with the species-specifically human intellect—but which crude picture nevertheless shows itself in a marked difference from contemporary cognitive psychology which, lacking a clear taxonomic principle (mixing neurophysiology with distinctions based more in convention than inquiry), deals in a cloud of poorly-distinguished facultative-concepts, such as consciousness, perception, thinking, judgment, language, and memory.  All of these concepts would, for the Scholastic, belong to “thinking” (except “consciousness”, an issue which was dealt with only in terms of wakefulness).

By contrast to the vague cloud of contemporary psychology, the Aristotelian-Scholastic system shows itself to be a kind of hierarchy: exterior sense faculties feed into interior faculties which turn sensed objects into perceived objects—from what is merely passively received into what is actively engaged.  These perceptual faculties are ordered by an evaluating executive power, that itself works for and in conjunction with an intellect that understands its objects not merely as beneficial, harmful, or neutral, but as intelligible—that is, as having a meaning irreducible to the sphere of the judging individual’s potential benefit or harm.

Conversely, the evaluations of the executive power can be improved by this intellectual processing (as we learn something that appears harmful may in fact be beneficial only through thinking carefully about it), and so too our abilities to recollect, retain, and even perceive through our senses more accurately (as the palette of a sommelier becomes improved).  Perhaps most importantly of all, and this is realized albeit only dimly today by cognitive-behavioral therapists, our faculties are susceptible to habituation.  In other words, we form habits not only as unconscious tendencies towards regular behaviors—coffee in the morning, scratching our chins when puzzled, puzzling through the NYTimes’ crossword, exercise, alcohol, good hydration, and so on—but we habituate our very faculties themselves: that is, we may become inclined to perform certain acts and operations in certain ways rather than certain others.

What does this mean for our cognitive faculties?  Find out in the next post.

[1] This being my own translation of the Latin sensus communis, which can only mislead if transliterated as “common sense”.

[2] These are, respectively, my translations of the Latin vis imaginativa, vis memorativa, and vis cogitativa; the first two containing connotations not shared by their modern English cognates.  Further, the Latins often distinguished the human vis cogitativa from the non-human animal vis aestimativa, insofar as they underestimated the complexity of non-human animal cognition.  See Deely 1971: “Animal Intelligence and Concept Formation” in The Thomist 35.1: 43-93.

Philosophy is my livelihood. If you'd like to support the work I do, please consider donating: