The paperback of the Introduction to Philosophical Principles: Logic, Physics, and the Human Person is now available from Amazon.  You can still download the complete PDF here for free (donations appreciated), but if like me, you prefer a physical copy, the paperback has been priced at a very affordable $11.75–and for something that is print-on-demand, the quality is pretty decent.  I’ve included some pictures of the proof below so you can get a good sense of what you’re getting (without the “not for resale” gray band). 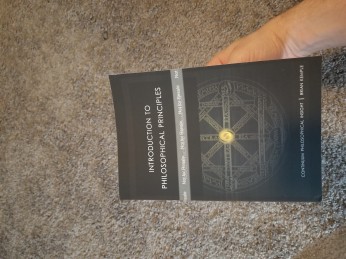 Like much of the world today, publishing has become a crazy industry.  This is not my first book: it is my third.  The first two (Ens Primum Cognitum in Thomas Aquinas and the Tradition [Amazon] and The Intersection of Semiotics and Phenomenology: Peirce and Heidegger in Dialogue [Amazon] — coming out this summer) are scholarly works intended for niche audiences.  As you can tell if you looked at the Amazon pages, they are painfully expensive.  This pricing, presumably, is made with the expectation that relatively few copies (at best, a few hundred) will be sold; primarily to academic libraries.  Few individuals are going to drop $100 on a 300-400 page book, especially one written by an unknown person.  All told, between Amazon and direct purchases from the publisher, I doubt Ens Primum Cognitum has sold as many as a hundred copies–and because of the contract structure, that means I have not received so much as a cent from its sales.

Likewise, I doubt I will ever see much if anything from The Intersection of Semiotics and Phenomenology.  It, too, will likely only ever be purchased by libraries, though there may be a broader audience to which it will appeal insofar as it covers two philosophical traditions rather than only one.  If it sells enough, I believe De Gruyter would re-sell it as a less-expensive paperback, in which case I might actually see some sort of small financial recompense for what was a grueling bit of labor.

Conversely, while I worked hard on the Introduction to Philosophical Principles, it was not nearly so hard as the other two books, and is not only appealing to a much broader audience but also priced so much more reasonably that I expect it may sell quite a few copies.  Amazon’s royalty structure is also much more reasonable: with Brill, I receive 2%.  With De Gruyter, 6%–if and only if it sells over 100 copies.  With Amazon, I receive 60% of the sale price less cost to print and taxes–and so, priced at $11.75, with each sale, I receive $3.75.  While there is certainly a merit to being published in a peer reviewed series from a reputable publishing house… it is a merit of pride, and a waning veneer of reputation, only.

That said: if the sales for the Introduction to Philosophical Principles go well, I will likely release some future volumes in the same manner.  I already have lots of material for the next one lined up…

Philosophy is my livelihood. If you'd like to support the work I do, please consider donating: