Ens Primum Cognitum in Thomas Aquinas and the Tradition: The Philosophy of Being as First Known

Ens Primum Cognitum in Thomas Aquinas and the Tradition presents a reading of Thomas Aquinas’ claim that “being” is the first object of the human intellect. Blending the insights of both the early Thomistic tradition (c.1380—1637AD) and the Leonine Thomistic revival (1879—present), Brian Kemple examines how this claim of Aquinas has been traditionally understood, and what is lacking in that understanding.

While the recent tradition has emphasized the primacy of the real (so-called ens reale) in human recognition of the primum cognitum, Kemple argues that this misinterprets Aquinas, thereby closing off Thomistic philosophy to the broader perspective needed to face the philosophical challenges of today, and proposes an alternative interpretation with dramatic epistemological and metaphysical consequences.  [Amazon] 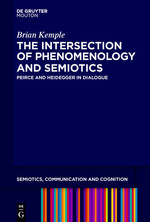 The Intersection of Semiotics and Phenomenology: Peirce and Heidegger in Dialogue

Many contemporary explanations of conscious human experience, relying either upon neuroscience or appealing to a spiritual soul, fail to provide a complete and coherent theory. These explanations, the author argues, fall short because the underlying explanatory constituent for all experience are not entities, such as the brain or a spiritual soul, but rather relation and the unique way in which human beings form relations. This alternative frontier is developed through examining the phenomenological method of Martin Heidegger and the semiotic theory of Charles S. Peirce. While both of these thinkers independently provide great insight into the difficulty of accounting for human experience, this volume brings these insights into a new complementary synthesis. This synthesis opens new doors for understanding all aspects of conscious human experience, not just those that can be quantified, and without appealing to a mysterious spiritual principle.  [Amazon]

This short book introduces what I consider to be the most important principles for conducting any systematic philosophical inquiry.  These are broken down into three sections: logic, physics, and person; or, the basic encounter with thought, with the world, and the nexus of thought and world.

The focus here is not on history or dialectic—that is, how these ideas have developed through time or the argumentative demonstrations of their veracity—but rather on a clear presentation of the ideas themselves along with heuristic suggestions for reflecting on these ideas and their integration into our lives.  History and dialectic are important but can be found in countless other books.  At the same time, this introduction should not be consumed in the manner of a textbook, nor should it be considered a reference.  Rather, it should be considered an introduction to questioning; for one does not induce the philosophical habit by rote, but by pursuing thoughtful inquiry with dedication; and while repetition is the mother of all learning, there is profound difference between the repetition of a parrot and the repetition of a recursively-engaged program of questioning. [Download] [Paperback | Amazon – forthcoming]

Who is not, from one hour to the next, one day to another, beset by worry about being in the right place at the right time? It’s a common truism that we cannot “be two places at the same time.” What someone typically intends by saying this is, as with all bromides, tritely true: I cannot be busy in the boudoir and the office at one and the same time; nor languidly splayed on my couch, glutting my gullet with a family-size bag of potato chips and bathing in the day-long glow of my TV, whilst simultaneously at the gym, buffing up and shedding the same, couch-fed calories. By the strictest reference of the term, being in one place necessitates exclusion of all others.

“Place”, however, is a term of relativity and analogical valence at once. [Read more]

…these ragged breaths of philosophical renewal struggle to absorb clean air in an atmosphere densely polluted with the residues of nominalist presupposition.  For one (and though this will not be our focus today, we will touch upon it), most of the industry which now claims the name of philosophy[2] unwittingly continues to eruct toxic, if green, naïve dualist assusmptions that pitch self against world, mind versus body, nature as opposing culture. For another (and this is our focus), the atmosphere from which many living outside the “philosophical” industry and within what-once-was-the-West draw their beliefs remains nominalist throughout; with none having inhaled it quite so deeply as those who believe, above all things, in the supreme fecundity of science. The time has come to clear the air.  [Read more]

The resilience of misattributions underscores the oral dominance of twentieth century Western culture; for it is in the nature of an oral culture to repeat these legendary narratives without researching their historical veracity. This is, after all, the time-devouring realm of scholars swamped in archival investigation.

That the misattributions are, here and elsewhere, being corrected further demonstrates the erosion of recent orality. The falsity of any legend and the errors to be found in any narrative can now be researched and corrected, or at least brought into dispute, by anyone, anywhere, at any time. Welcome to digital life.  [Read more]

The Continuity of Being: C.S. Peirce’s Philosophy of Synechism | Epoche Magazine

Humankind cannot bear very much discontinuity. This is not an a priori postulate, but an observationally-derived truth, and one which a study in attitudes towards so-called postmodern art will confirm, a form of art which is deliberately discontinuous. Presented with a fragmentary visage or a lack of musical harmony or with any prolonged experience of aesthetic rupture, we seek out meanings — whether by invention, authorial biography, social context, etc. — which may serve as a common foundation in which the disparate presented minima may be unified, or, at least, cobbled into a coherent object-narrative.

If the meaning found in one experience does not fit that found in another, we struggle to maintain our personal coherence to the degree that those experiences have importance and inversely to their evident disparity.  [Read more]

Abstract: While there is an absence of treatises devoted to the question of ens ut primum cognitum, there is no shortage of brief and implicit treatments; indeed, nearly every Thomist of the past seven centuries seems to have at least something to say about the notion that being is the first of our intellectual conceptions. Most recent Thomist thinkers—including Gilson—assume this ens to be nothing other than the ens reale of things entitatively considered, operating as they do out of a framework within which realism and idealism are presumed to be exhaustive and mutually exclusive attempts to answer the question of human knowledge. It is the intent of this essay to examine how Gilson arrives at his position, which he calls “metaphysical realism,” and to point to some of the difficulties it entails.  [Read more]

The Preeminent Necessity of Prudence

Abstract: Thomas Aquinas holds not only that prudence, the virtue of right practical reasoning, is necessary for living well, but emphatically asserts that it “is the virtue most necessary to human life.” This essay argues that the force of Thomas’ assertion should not be under-stood as simply contradicting the objection—that “it seems that prudence is not a virtue necessary to living a good life”—with vigor, but rather, as we intend to show, that although all the moral virtues are necessary for the good life, there is a superior importance to the need for prudence, as that whereby the parts of virtuous living are not merely stacked up like building blocks of moral righteousness, but coalesced into a complete whole. To make clear the reasons for this preeminent necessity, we shall first consider the parts and constitution of prudence itself, its relationship to the other virtues, and conclude with its principal act, praeceptum.  [Read more]

Abstract: Human beings cannot bear very much discontinuity: we innately desire resolution of our experiences, no matter how disparate they are from one another, into a common whole, into a life which “makes sense.” We desire to be persons with identities resolved into coherent wholes. But the socio-cultural world of everyday activity often presents a fragmentary and irresoluble array of experience which seemingly prevents this resolution. At the root of this fragmentation is not, however, the experiences themselves, but rather a lack of understanding concerning human cognition and consciousness. Without clarifying the possibilities of human intellection in the constitution of consciousness, we will remain at a disadvantage in the pursuit of coherent personal identities. It is to this lattermost point—how the intellectual sign is formed and how, in its formation, it in turn produces the horizons of our personal identities—that this article, conceived and reared in the tradition of thought exemplified by John Deely, is directed.

The Consolation of a Christian

Abstract: If the desire to see God in Himself belongs to human nature, but the attainment of that vision can be affected only by supernatural grace, how is it that this desire remaining unfulfilled is not a frustration of the nature? How is it that nature is aiming at a good in vain, at an object that it cannot achieve? Even though the elicited natural desire to see God is not fulfilled in this life, and even though there is no demonstrative proof that can be provided by natural reason alone of its being fulfilled after death, the natural human desire is nevertheless not frustrated by a natural deficiency. Rather than being contrary to human nature, this lack of fulfillment exists because of that nature, inasmuch as every human is by nature a limited intellector of being.